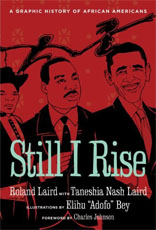 Still I Rise: A Graphic History of African Americans

"As a contribution to illustrated history from a black point of view," writes acclaimed foreword author Charles Johnson, "Still I Rise is a unique achievement, one that will be valued -- like Art Spiegelman's Maus: A Survivor's Tale . . . by students, educators, collectors, and general readers for a long time to come." Newly available in an updated edition, the compelling and irreverent graphic history that recounts the entire scope of the African-American experience, now concludes with Barack Obama's groundbreaking 2008 presidential candidacy.

Still I Rise traces the epic struggles and victories of African-Americans in the face of racist obstacles and unfathomable hardships. It follows the rise of slavery; the Nat Turner Rebellion; military contributions of African Americans; the birth of modern integration; Freedom Summer; the emergence of Black Power; the Million Man March; and Hurricane Katrina. Cultural milestones are also found here, from the Harlem Renaissance and the Invisible Man to heritage festivals and artists who illuminate the complexity of AfricanAmerican life. Heroic notables and visionaries are introduced: Frederick Douglass; Sojourner Truth; Madame C. J. Walker; Ida B. Wells; Malcolm X; Martin Luther King Jr.; and many more. Lesser-known luminaries are also featured, including Carter G. Woodson, the father of Black Studies, and Deadria Farmer-Paellmann, who campaigned for restitution from modern companies that played a direct role in slave trade.

The insightful text is sometimes acerbic, other times perceptively humorous, and always powerfully honest. The authors' first-rate scholarship is supplemented with a healthy dose of attitude, and Bey's illustrations are both energetic and uncompromising.

Taking its title from a Maya Angelou poem, Still I Rise is a moving and inspirational account of the rich history of African Americans.

Reviews:
"Still I Rise is an amazingly condensed cartoon chronicle of African Americans . . . brings to life the struggles and triumphs of blacks in America . . . the Lairds have packed an epic quantity of information into this engaging, well-written volume."
--Entertainment Weekly

"Still I Rise is a quick way to satisfy the hunger we have about who we are.  I gave my young son Nyere a copy of Still I Rise.  He came back with a head filled with history."
--E. Ethelbert Miller, Howard University

"This graphic history is funny, intelligent, deeply researched, and, well, graphic.  Brilliantly so.  It's not just the history of African Americans; it's the African-American history of all Americans."
--Russell Banks, Author of Rule of the Bone