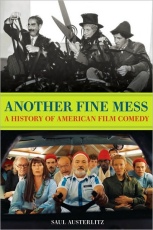 Another Fine Mess: A History of American Film Comedy

Charlie Chaplin. Buster Keaton. The Marx Brothers. Billy Wilder. Woody Allen. The Coen brothers. Where would the American film be without them? Yet the cinematic genre these artists represent -- comedy -- has perennially received short shrift from critics, film buffs, and the Academy Awards.

Saul Austerlitz’s Another Fine Mess is an attempt to right that wrong. Running the gamut of film history from City Lights to Knocked Up, Another Fine Mess retells the story of American film from the perspective of its unwanted stepbrother -- the comedy. In 30 long chapters and 100 shorter entries, each devoted primarily to a single performer or director, Another Fine Mess retraces the steps of the American comedy film, filling in the gaps and following the connections that link Mae West to Doris Day, or W. C. Fields to Will Ferrell. The first book of its kind in more than a generation, Another Fine Mess is an eye-opening, entertaining, and enlightening tour of the American comedy, encompassing the masterpieces, the box-office smashes, and all the little-known gems in between.

Reviews:
"An affectionate chronicle of a century of laughs from the sliver screen [and] a compulsively readable reference for the confirmed comedy fan. . . . The author provides a delightful roll call of the funny men and women who have distinguished the cinema of laughter, and an indispensable listmaking tool for the Netflix generation in search of a good guffaw. An enthusiastic, well-observed, fresh look at old favorites that makes a compelling case for the genius of American film comedy."
--Kirkus Reviews


"Only the fearless spring into the canonical underpinnings of film comedy, a genre little understood and often, well, laughed at. Saul Austerlitz has thrillingly built a canon of artists, defending and critiquing their careers (is there anything of merit to be learned from Duck Soup? Yes! Meet the Fockers? Oh, yes!) with the acute binocular vision of a scholar and a fan. I was enrapt, argumentative, gobsmacked, amused, and ready to rethink what I know about American film comedy. Crack this book open and let the debate -- and flying pies -- begin.
--Glen David Gold, author of Sunnyside and Carter Beats the Devil

"Conventional wisdom holds that analyzing comedy is a thankless task -- who's to say what's funny, and why kill the fun of it? -- but Saul Austerlitz's wide-ranging survey of American film comedy is both illuminating and hugely enjoyable. With its sharp insights and vivid biographical sketches, it's first-rate film criticism and a terrific resource to boot."
--Dennis Lim, editor of The Village Voice Film Guide