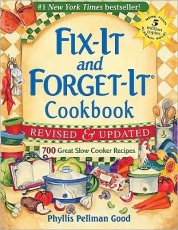 The book has already sold more than 5 million copies, so we didn't want to spoil it! We have only added a few enhancements to this original cookbook in the wildly claimed Fix-It and Forget-It cookbook series:

"The author who came in second to Rachael Ray in total foodie sales was Phyllis Pellman Good, who does not have a TV show."
--Summary of 2007 Bestsellers, Publishers Weekly, March 24, 2008

"One reason why the books are so popular is that they aren't intended for folks who dabble in cooking as a hobby or a whim. . . . 'The audience that I have in mind is those who have to cook every day of the week,' says Good."
--Los Angeles Times, January 7, 2009

"'One of the losses in our lives is that it's so hard to sit down at the dinner table, night after night, and have parents and children eating together,' says Phyllis Pellman Good. . . . 'With the slow cooker, you can prepare food early and bring everyone together at the table,' she says. 'It helps immensely.'"
--The Associated Press, December 26, 2008