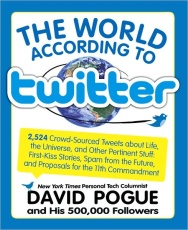 2,524 Crowd-Sourced Tweets about Life, the Universe, and Other Pertinent Stuff: First-Kiss Stories, Spam from the Future, and Proposals for the 11th Commandment

New York Times personal technology columnist David Pogue has tapped into the collective wit and wisdom of his half-million followers on Twitter.com by posing a different, thought-provoking question every night. The result of this modern social-networking experiment is a laugh-out-loud-funny, and occasionally poignant, record of shared human experience.

Finish a familiar saying in a new way.

Make up a concept for a doomed TV show.


Change 1 letter of a familiar title.

Reviews:
"Twitter indeed is one big global mixer, with millions of conversations happening all at once. Naturally most of them are insipid, have you never been to a cocktail party?"
--David Weir, BNet