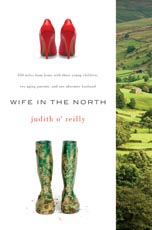 Wife in the North

Perhaps it was because she was pregnant and hormones had eaten her brain that Judith O’Reilly was persuaded by her husband to leave London for the northern wilds. But pregnancy hadn’t addled her enough not to have a back-up plan: If life in the country didn’t measure up, the family would return to the city.

Far from home, Judith, a journalist and mother of three young children, discovers just how tough an assignment making a new life is. In the heart of the country, with no decent coffee in sight, Judith swaps high heels for rubber boots and media-darlings for evangelical strangers and farmers’ wives, in an effort to do that simple thing that women do—make hers a happy family.

Her headlong foray into the country invites adventure at every turn. As she adjusts to the lay of the land and searches for her own true north in an alien landscape, her story offers a hilarious, heartfelt reflection of how to navigate the challenges and rewards of motherhood, marriage, and family.

Reviews:
“A compellingly readable, funny, wry, ultimately heartbreaking saga of womanhood, motherhood and the things we do to humor the ones we love the most. Best yet, it’s gorgeously written. I’ll say that again: gorgeously…. O’Reilly’s a lovely writer of poignant scenes and funny bits of dialogue, and she has a knack like few writers do for capturing the shimmering, stressful moments that make mothering the unique challenge and burden and utter exaltation that it is…. Why did O’Reilly move, crate and barrel, to the country? The answer, it turns out, looks like love. Did she stay? You’ll have to read the ending—brave, moving, revelatory—to know for sure.”
—Buffalo News