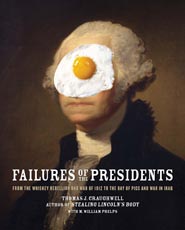 Failures of the Presidents: From the Whiskey Rebellion and War of 1812 to the Bay of Pigs and War in Iraq


Everybody makes mistakes, but when an American president blunders the result can be catastrophic.

This in-depth look at presidential decision-making processes gone wrong reveals the policies and courses of action that seemed promising at the time, but turned out to be the worst decisions American presidents have made. The stories featured here altered the course of the nation’s history, and in some cases changed the history of the world for the worse.

Every chapter takes the reader inside the White House as the president confronts trouble at home and threats from abroad and explains the problems and choices the president faced, what he hoped to achieve, and why his decision went horribly wrong, including:
Failures of the Presidents is a gripping and horrifying history of presidential directives—most well intended but some arguably not—resulting in terrible disaster.

Reviews:
“What a great read! We learn as much from our failures as our triumphs and we’ll all learn a great deal from this disturbing slice of living history.”
—Joseph Cummins, author of The War Chronicles from Chariots to Flintlocks and History’s Great Untold Stories