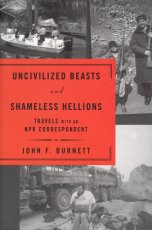 Uncivilized Beasts and Shameless Hellions: Travels with an NPR Correspondent

"Radio is cool. There's something that happens when writing, natural sound, and voice come together to transport listeners to a place. It only happens with radio. At National Public Radio, where I've been a journalist for 20 years, there's only so much you can squeeze into a 7-minute story. Over the years, I've filled my reporter's notebooks with so much that I couldn't report. Often it is the sixth 'W,' the one they never teach in J school. After deadlines, reporters don't talk about the who, what, where, why, and when. We talk about the whoa -- bizarre encounters, miserable journeys, horrible hotels, great fixers, dangerous highways, gruesome dead people, gruesome live people, and unsung heroes. This book is my attempt to make sense of it all, to sort through the beasts and the hellions."

In this candid, intimate account, John Burnett exposes the whoa he's known through his adventures as an NPR reporter. The result is a revealing and personal account that will fascinate not only NPR listeners, but anyone interested in the state of our world today and how the media covers it.

As a radio journalist whose work appears regularly on Morning Edition and All Things Considered, John F. Burnett has reported from the Branch Davidian standoff in Waco and the Kosovo conflict; covered the guerilla wars in Central America; ridden with US marines during the invasion of Iraq; and reported from the flooded streets of New Orleans after Hurricane Katrina and from New York City, Pakistan, and Afghanistan in the weeks and months following 9/11.

In Uncivilized Beasts and Shameless Hellions, John Burnett takes readers behind the scenes of the major events of our time, letting us see what it's really like gathering the news on the front lines.

Reviews:
"Within the public radio community, there's a handful of reporters we all look up to, and John Burnett's been one of those for two decades. I don't understand how John does it, but stories that seem so alive and surprising on the radio are just as alive and surprising on the page. He's a reporter's reporter: clearheaded and unrelenting and brave, with a great eye for detail."
--Ira Glass, host, This American Life

"It's not just his 6'7" frame that puts John Burnett head and shoulders above most reporters. It's that he goes to the world's worst places and tells their stories  with eloquence, compassion, and, when necessary, fury. A careful observer and stunning writer, Burnett's dispatches are radio revelations. This book broadens the reports and honors our profession."
--Susan Stamberg, special correspondent, National Public Radio

"John Burnett tells the inside story of journalism with the same candor and keen eye that he brings to his dispatches from Iraq, Afghanistan, New Orleans -- wherever war, natural catastrophe, or tangled human emotions have created the mix of events we call the news. Every young reporter should have this book."
--Lawrence Wright, staff writer, The New Yorker

"John Burnett, whose finely honed writing is well known to listeners of National Public Radio, has given us a series of eloquent and moving vignettes from some of the most depraved and broken corners of the planet. His writing is enriched by his honesty, his ability to burrow deep into the layers of the events he covers, and his unstinting drive to tell the truth."
--Chris Hedges, author of War Is a Force That Gives Us Meaning