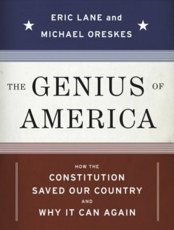 The Genius of America: How the Constitution Saved Our Country -- and Why It Can Again

The United States is the longest running democracy in history at 220 years. While over a hundred countries around the world have used our Constitution as their model, Americans are growing frustrated with gridlock, partisan politics, and special interests. In our impatience for results, we have lost sight of what the framers forged -- a pragmatic document that channels self-interest into productive consensus. In this important book, veteran journalist Michael Oreskes and legal scholar Eric Lane make a passionate plea to restore our "Constitutional Conscience."

The Genius of America looks at the Constitution's history relative to this current crisis, from its framing to its centuries-long success, including during some of the country's most turbulent and contentious times. While Lane and Oreskes affirm the Constitution's resilience, they also remind us that our democracy is a fragile construct that requires both an understanding of its history and a commitment to participation. They challenge us to let this great document work as it was designed -- valuing political process over product. They hold our leaders accountable, calling on them to stop fanning the flames of division and to respect their institutional roles. In the final assessment, The Genius of America asks us to lean on the framers and their experience. Unless we reconnect with the document so central to our success, our democracy is at risk.

Reviews:
"Our constitution properly understood and applied could restore the nation's equilibrium between the instinct for individualism and the need for a sense of community. It might also have avoided the tragedy of Iraq by prompting Congress to use its power under Article 1 to declare, or not declare, war as well as to end it. Lane and Oreskes summon us to restore our Constitution's efficacy by our reconnecting with its history and its intelligence. They do it brilliantly."
--Governor Mario Cuomo

"We the Readers have a treat in store: a close look inside the secret meeting that struggled, convulsed, and produced America's political Scripture. Eric Lane and Mike Oreskes explore the collective genius that created our 'Constitutional Conscience' and show how the genuine political genius of Madison enables today's majority to rule without ruining the rights of the minority."
--William Safire, New York Times columnist

"With vivid narrative and perceptive analysis, The Genius of America reminds is of the Constitution's amazing resilience and adaptability. Lane and Oreskes bring to life the era of the framers and the critical moments in our history that tested their vision, and make a powerful case that the troubled state of contemporary American politics can be rectified within the structure of a constitutional system predicated more on the pursuit of self-interest than the spread of republican virtue. Every American would benefit from reading this book -- starting with the president and vice president and the members and leaders of Congress."
--Thomas E. Mann and Norman J. Ornstein, coauthors of The Broken Branch: How Congress is Failing America and How to Get It Back On Track

"Though the personal stories of the founding fathers have become hot properties, the institutions the framers created -- the executive, the judiciary, and especially the Congress -- enjoy none of that popularity. Lane and Oreskes seek to change that by reminding us how essential the Constitution is to our nationhood and why it's important for the country to rekindle the Constitutional Conscience as we face the challenges of the twenty-first century."
--Cookie Roberts, ABC News and NPR, author of Founding Mothers