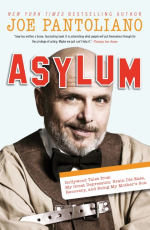 Asylum: Hollywood Tales from My Great Depression: Brain Dis-Ease, Recovery, and Being My Mother's Son

In this deeply moving and resourceful memoir, the beloved actor-director and New York Times bestselling author takes aim at the stigma attached to what he calls "brain dis-ease" by writing candidly and humorously about his journey through clinical depression.

Most people know Joe Pantoliano from his memorable roles in such blockbuster films as The Matrix, La Bamba, Empire of the Sun, The Goonies, Risky Business, Midnight Run, The Fugitive, and Memento. In television Joe is remembered for his Emmy-winning performance on The Sopranos. But before he became one of Hollywood's most successful actors, he was "Joey Pants" from Hoboken, the dyslexic son of a fiercely controlling mother with her own undiagnosed brain dis-ease, or BD. Growing up, Joe always knew that something was different about him, too -- he just didn't know what. "It was as if I was born with a huge hole inside my soul," he writes. Not until much later in life was Joey diagnosed with clinical depression. Now he has a message for the millions of people who suffer from BD: You are not alone. You can learn as he did that by surrendering to BD, you can overcome it.

Joey's path to recovery was filled with trials and tribulations. Asylum recalls his early years as a struggling actor, when he was befriended and mentored by Natalie Wood and Robert Wagner, and Eli Wallach and Anne Jackson. Over the years he had major hits working with such megastars as Tom Cruise, Harrison Ford, and Tommy Lee Jones, and directors Steven Spielberg, Christopher Nolan, and the Wachowskis. But as his success grew, so did his dis-ease. Before he was diagnosed he tried to fill the hole inside him with alcohol. When the alcohol stopped working, he started taking up to twenty Vicodin a day in an effort to obliterate his emotional and physical pain.

Asylum is the story of Joe's quest for the Hollywood success he was so sure would cure him. And when it didn't, he began a painful downhill spiral with the Seven Deadly Symptoms (the term he coined for his addictions to food, sex, vanity, alcohol, prescription drugs, shopping, fame) that so often accompany undiagnosed brain dis-ease. Interweaving deeply personal experience with informative discourse, Pantoliano creates a highly relevant and unflinchingly honest memoir of everything that led to his eventual awareness, diagnosis and recovery, and public activism and advocacy. His story will resonate with people who suffer from brain dis-ease, enlighten anyone who aspires to join him in the asylum called Hollywood, and entertain all who have admired his career.


"Joey has written a brave, fascinating book. It is astonishing what people will put themselves through for the privilege of acting. Maybe we just can't help it."
-- Tommy Lee Jones

"A must-read! Joey Pants gives us insights so valuable that one can only call his courage to share a blessing for all."
-- Andy Garcia

"Bravo! Joe Pantoliano's very honest, moving, hilarious, and tragic telling of a life's journey is both profound and enlightening. Asylum will make anyone who reads it a more generous and understanding human being."
-- Andrew Davis, director of The Fugitive

"Bravo to this brave and beautiful book, which should be read not only by actors and others 'in the business' but by anyone with a heart."
-- Anne Jackson, Eli, Roberta, Peter, and Katherine Wallach

"A model of inspiration and courage for those who suffer from mental illness in silence to come forward and seek the life-changing help that is currently available."
-- Robert Irvin, M.D., Instructor of Psychiatry, Harvard Medical School

"Joey has opened himself up so that others can benefit from what he has discovered about mental illness. No one should miss this candid and richly told memoir."
-- Jacqueline Lerner, Ph.D., Professor of Applied Developmental Psychology, Boston College