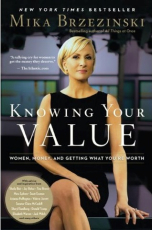 Knowing Your Value: Women, Money, and Getting What You're Worth

Why aren't women always paid what they're worth? Mika Brzezinski shared her personal story as well as observations and advice from some of America's most successful women.

It's no secret that women have long been overlooked and undercompensated, and while great strides have been made in recent decades, the value placed on women versus their male counterparts is still consistently unbalanced. In Knowing Your Value, bestselling author, Mika Brzezinski takes an in-depth look at how women today achieve their deserved recognition and financial worth.

Prompted by her own experience as co-host of Morning Joe, Mika interviews a number of prominent women across a wide range of industries on their experience moving up in their fields. Mika reveals how these women, including such impresarios as White House star Valerie Jarrett, comedian Susie Essman, writer and director Nora Ephron, Facebook's Sheryl Sandberg, and broadcaster Joy Behar, navigated the inevitable roadblocks that are unique to women. Mika also uncovers what men think about the approach women take in the workplace, getting honest answers from Donnie Deutsch, Jack Welch, Donald Trump, and others about why women are paid less, and what pitfalls women face -- and play into -- as they try to get their worth at work. Knowing Your Value blends these personal stories and opinions with the latest research and polling on issues such as equal pay, women in the boardroom, and access to start-up capital

Written in Mika's brutally honest, funny, and self-deprecating style, Knowing Your Value is a vital book for professional women of all ages.


"A lot of getting ahead in the workplace has to do with being willing to raise your hand . . . If we as women don't raise our hands in the workplace, we're not going to get the same opportunities men do. Because men keep their hands up."
-- Sheryl Sandberg, COO of Facebook

"We are our own worst enemy."
-- Valerie Jarrett, senior adviser to President Barack Obama

"The words favored nations -- that's an expression all women should know. In other words, you always want to be paid no less than what anyone else is being paid."
-- Nora Ephron, writer and director

"Just look around and you'll see plenty of evidence that asking for what we want results not in the realization of our own worst fears but in getting what we want."
-- Arianna Huffington, president and editor in chief of the Huffington Post Media Group