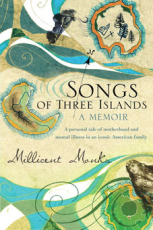 Songs of Three Islands: A Memoir: A Personal Tale of Motherhood and Mental Illness in an Iconic American Family

Millicent Monks was born into one of the most famous families in America; her great-grandfather was the brother of Andrew Carnegie.

Their fabled wealth enabled them to amass great houses and even private islands, but it was a dynasty torn apart by a succession of tragedies: suicide, alcoholism, and extremities of mental illness were passed on from generation to generation.

For the women in the family, the consequences of this legacy have been painful. After a difficult childhood, the author’s daughter was diagnosed at the age of eighteen with what is now known as borderline personality disorder, a debilitating mental illness that was for the parents -- in the words of the novelist Sebastian Faulks -- "a public shame as well as private devastation." Like all mothers of children afflicted with this condition, Monks suffered from guilt and self-recrimination as she struggled to heal a disease that had no cause but for which she was held responsible.

In the end, through the intervention of a wise Jungian therapist, meditation, and -- most important of all -- acceptance, the author achieves a self-insight that enables her and her daughter to arrive at a delicate peace. Songs of Three Islands powerfully demonstrates that we are not defined by our inheritance alone.


" . . . a brilliant, hauntingly beautiful, melancholy memoir that is must reading for all who have been brushed by the wing of mental illness."
-- William S. Cohen, Former US Secretary of Defense and author of Love in Black and White

"Enthralling . . . is a testament to the importance of family love and of the saving power of a strong marriage."
-- Charles Handy, author of The Empty Raincoat

"Songs of Three Islands is a multi-layered weave of family memoir, myth and Jungian premonition that reads at times like a gothic novel."
-- The Guardian

"... lyrical memoir, which tells the physical journey of a family from one island to the next. It also explores, for the first time publicly, the thread of mental illness woven through the seemingly glittering tapestry."
-- The New York Times