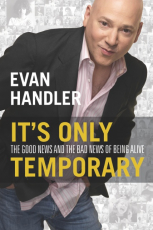 It's Only Temporary: The Good News and the Bad News of Being Alive

Picking up ten years after his first book, Time on Fire, Handler again uses what the New York Times calls his "laceratingly funny and revealing" storytelling skills to weave twenty-one new tales into a defiantly unconventional memoir. Consistently witty and insightful, Handler's stories shift effortlessly from the comedic to the profound, musing with equal intensity on the existence of God and his experiences with TV stardom. Then, just when it seems he's failed to make the most of his astonishing second chance, Handler finds his way to miracles even greater than the ones that saved his life. His memoir describes his journey from darkness to light, from yearning to gratitude, and in so doing succeeds as both a stirring love story and a classic coming-of-age tale. It's Only Temporary celebrates the transformation of a boy to man -- even if it took Handler more than forty years to get there.

Reviews:
"In It's Only Temporary, Evan Handler confronts the ambiguities of life backward, forward, and in between. With hilarious honesty he reflects on the realization that we can start over again. It's Only Temporary is a heartfelt book for all of us who are getting younger and older at the same time."
-- Amy Tan, author of The Joy Luck Club, The Bonesetter's Daughter, and The Kitchen God's Wife

"In a series of wonderful essays, Evan Handler gives himself up to us - warts and all. To our amusement and bemusement we share in his emotional growth as he struggles to mature. I not only laughed along with him but felt that I too had grown a little along the way. Who could ask for more?"
-- Lewis Black, comedian, "Daily Show" correspondent, and author of Nothing's Sacred

"Evan Handler's new book is simply wonderful. He pulls you inside his life, and you come out his very close friend."
-- Neil Simon, Pulitzer Prize winning playwright/screenwriter of "Lost In Yonkers," "The Odd Couple," "Brighton Beach Memoirs," and "The Goodbye Girl"

"In It's Only Temporary, Evan Handler confronts the subject of mortality the way some non-fiction writers confront, say baseball: with wonder, irreverence, and a deep and resonant feel for his subject. His memoir is candid and highly enjoyable."
-- Meg Wolitzer, author of The Ten Year Nap, The Wife, and The Position

"Evan Handler is not only a fine actor, he's a damn good writer. It's Only Temporary is wise and funny and as righteously indignant as it is endearingly self-effacing. In what may be a literary first, the book actually left me wanting more."
-- Meghan Daum, author of My Misspent Youth and The Quality of Life Report

"EvanHandler's unsparingly honest stories about life, love, and his own shortcomings are hilarious to read and oh, so easy (and fun!) to relate to. By the end you will be left with the surprising but unmistakable feelings of hope and redemption. IT'S ONLY TEMPORARY is truly an inspiration, particularly for anyone who's out there looking for love.
-- Liz Tuccillo, co-author of He's Just Not That Into You

"Change is good -- that's the credo Evan Handler reinvigorates with the hard won wisdom of this hard luck story. Handler's prose style is disarmingly funny and smoothly conversational. He writes like a guy who's just happy to be here, and a little pissed off at you if you're not. As he has worked hard to shape himself into a good actor, life has shaped him into a good man. The cover photo is worth the price alone."
-- David Duchovny, actor, director, screenwriter