Todd G. Buchholz, author of Rush: Why You Need and Love the Rat Race, is a former White House director of economic policy, award-winning teacher at Harvard, managing director of the Tiger hedge fund, and was a fellow at Cambridge University in 2009. He is also a founder of Two Oceans Management, as well as co-producer of the Tony Award-winning Broadway hit Jersey Boys. A regular contributor to NPR's Marketplace, he appears monthly on PBS's Nightly Business Report and his book New Ideas from Dead Economists is used in universities throughout the world. Buchholz has also written for the New York Times, the Wall Street Journal, Forbes, and Reader's Digest. He lives with his wife and daughters in Southern California. 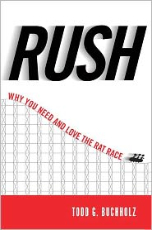 Rush: Why You Need and Love the Rat Race