James W. Forsythe, M.D., H.M.D., author of Anti-Aging Cures: Life Changing Secrets to Reverse the Effects of Aging, has long been considered one of the most respected physicians in the United States, particularly for his treatment of cancer and the legal use of human growth hormone.

In the early 1960s, Dr. Forsythe graduated with honors from University of California at Berkeley and earned his Medical Degree from University of California, San Francisco, before spending two years' residency in pathology at Tripler Army Hospital, in Honolulu. After a tour of duty in Vietnam, he returned to San Francisco and completed and internal medicine residency and an oncology fellowship.

Dr. Forsythe is a world-renowned speaker and author. He has co-authored and written chapters in numerous bestsellers. Today, in Reno, Nevada, Dr. Forsythe maintains a conventional medical clinic, the Cancer Screening and Treatment Center, and a homeopathic practice, Century Wellness Clinic. A former associate professor of medicine at the University of Nevada School of Medicine, Dr. Forsythe has conducted numerous original clinical outcome-based studies on many natural substances. For more than twenty years, he has been interested in integrating complementary and conventional medicine. 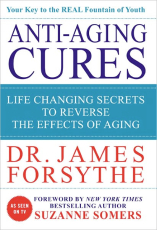