Ellen Freudenheim is the author of five books, including an award-winning guide to Brooklyn, a wedding planner for the executive bride, and Healthspeak, a dictionary defining more than 2,000 health-care-oriented terms. She holds two master's degrees, including a degree in public health, and has been both as adjunct professor of public relations at New York University and public relations manager for Chemical's retail banking division. She has appeared on nationally broadcast television and radio news programs on ABC, CBS, NBC, NPR, and BBC. A baby boomer herself, she lives with her family in Brooklyn, New York. See www.lookingforward2.com for more information. 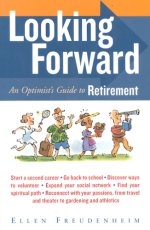