Jerry Porras coauthored (with Jim Collins) Built to Last: Successful Habits of Visionary Companies, which has been translated into twenty-five languages and sold more than one million copies. He is Stanford Graduate School of Business Lane Professor of Organizational Behavior and Change, Emeritus, and directed the School's Executive Program on Leading and Managing Change for sixteen years. He has also lectured on visionary companies before senior management audiences worldwide.

Stewart Emery is considered one of the fathers of the Human Potential Movement. He served as the first CEO of est, cofounded Actualizations, led seminars in dozens of countries, and has coached over 12,000 people in the last three decades. He is the bestselling author of the books Actualizations: You Don't Have to Rehearse to Be Yourself and The Owner's Manual For Your Life. As a consultant, he asked questions that led MasterCard to its legendary "Priceless" campaign.

Mark Thompson captured the insightful stories that formed the foundation for Success Built to Last from hundreds of personal interviews with enduringly successful people around the world. He is an executive coach, advisor to senior management teams, award-winning audio book producer, and former executive producer of Schwab.com. Forbes Magazine listed him as one of America's top venture investors with the "Midas" touch. 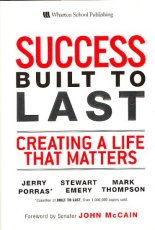 Success Built to Last: Creating a Life that Matters