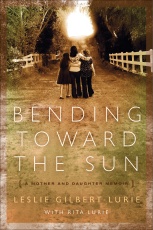 A miraculous lesson in courage and recovery, Bending Toward the Sun tells the story of a unique family bond forged in the wake of brutal terror. Weaving together the voices of three generations of women, Leslie Gilbert-Lurie and her mother, Rita Lurie, provide powerful -- and inspiring -- evidence of the resilience of the human spirit, relevant to every culture in every corner of the world. By turns unimaginably devastating and incredibly uplifting, this firsthand account of survival and psychological healing offers a strong, poignant message of hope in our own uncertain times.

Rita Lurie was five years old when she was forced to flee her home in Poland to hide from the Nazis. From the summer of 1942 to mid-1944, she and fourteen members of her family shared a nearly silent existence in a cramped, dark attic, subsisting on scraps of raw food. Young Rita watched helplessly as first her younger brother then her mother died before her eyes. Motherless and stateless, Rita and her surviving family spent the next five years wandering throughout Europe, waiting for a country to accept them. The tragedy of the Holocaust was only the beginning of Rita's story.

Decades later, Rita is a mother herself, the matriarch of a close-knit family in California. Yet in addition to love, Rita unknowingly passes to her children feelings of fear, apprehension, and guilt. Her daughter Leslie, an accomplished lawyer, media executive, and philanthropist, began probing the traumatic events of her mother’s childhood to discover how Rita's pain has affected not only Leslie's life and outlook but also Leslie's daughter's, Mikaela's. A decade-long collaboration between mother and daughter, Bending Toward the Sun reveals how deeply the Holocaust remains in the hearts and minds of survivors, influencing even the lives of their descendants. It also sheds light on the generational reach of any trauma, beyond the initial victim. Drawing on interviews with the other survivors and with the Polish family who hid five-year-old Rita, Leslie and Rita bring together the stories of three generations of women -- mother, daughter, and granddaughter -- to understand the legacy that unites, inspires, and haunts them all.

"Bending Toward the Sun is like a great episode of Law & Order -- a riveting story where the stakes are life and death, insoluble moral dilemmas and an ending that is both upsetting and uplifting. Bolstered by writing that is compelling and sensitive, the book transcends the holocaust genre with its multi-generational point of view on the ultimate effect of fear and evil on young minds."
-- Dick Wolf
Emmy Award-winning creator and Executive Producer of Law and Order; Law and Order: Special Victims Unit; and Law and Order: Criminal Intent

"This book is heartbreaking yet inspiring, a story told by three generations -- the grandmother, who is a child survivor, the mother, a successful American professional, and the daughter, full of talent, promise and hope. At its core, this book is a study of how the Holocaust experience wraps itself around each woman -- creating extreme fear of separation, setting off depression, filling mind and memory with haunting evil and indefinable ghosts. Yet it also tells us of hard won wisdom for living distilled from pain and loss, of life force driven by the will to overcome suffering, of Jewishness lost and Jewishness reborn, of unquenchable love -- all passed on and shared between the generations through the filter of the Holocaust. Gripping, exhausting, exciting, devastating -- this book is at times hard to read but always impossible to put down."
-- Rabbi Irving Greenberg
Founding President, Jewish Life Network; former Chairman of United States Holocaust Memorial Museum

"Here is a memoir that takes us through many worlds, through heartache and noble hopes, through the mysteries of family love and toward a beautiful, light filled conclusion. Read Bending Toward the Sun and enrich your life."
-- Rabbi David Wolpe
Named the #1 pulpit Rabbi in America by Newsweek magazine (2008)
Rabbi of Sinai Temple in Los Angeles
Author of Why Faith Matters and Making Loss Matter -- Creating Meaning in Difficult Times

"Bending Toward the Sun is a captivating memoir that explores a complicated, loving, and enduring mother-daughter bond, and reveals how doubts, hopes, and dreams are handed down from generation to generation. As both a mother and a daughter, I found it deeply touching."
-- Arianna Huffington
Author, Syndicated Columnist, and founder of The Huffington Post

"Bending Toward the Sun is more than a moving and inspiring Holocaust memoir. It is a story of mothers and daughters and the complicated and profound legacies that one generation leaves for the next. It is a tribute to the wonder of love and the truth that even after unspeakable loss, the spirit can be rekindled. Anyone who is a mother or who had a mother will be transformed by this powerful book."
--Rabbi Laura Geller
Senior Rabbi of Temple Emanuel in Beverly Hills
Third Woman in the World to be ordained a Reform Jewish Rabbi
Named in 2007 by the Forward newspaper as one of the "Forward 50 Individuals"