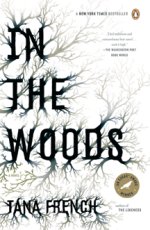 In Tana French's powerful debut thriller, three children leave their small Dublin neighborhood to play in the surrounding woods. Hours later, their mothers' calls go unanswered.  When the police arrive, they find only one of the children, gripping a tree trunk in terror, wearing blood-filled sneakers, and unable to recall a single detail of the previous hours.

Twenty years later, Detective Rob Ryan--the found boy, who has kept his past a secret--and his partner Cassie Maddox investigate the murder of a twelve-year-old girl in the same woods. Now, with only snippets of long-buried memories to guide him, Ryan has the chance to uncover both the mystery of the case before him, and that of his own shadowy past.

"Readers who like their hard-boiled police procedurals with an international flair will love Irish author Tana French's debut novel....In the Woods is as creepily imaginative as it gets."
--USA Today

"Tana French promises two whodunits for the price of one in her harrowing first novel. Drawn by the grim nature of her plot and the lyrical ferocity of her writing, even smart people who should know better will be able to lose themselves in these dark woods."
--Marilyn Stasio, The New York Times Book Review

"An auspicious debut...The theater-trained French clearly knows a thing or two about drama....The book's plot and pacing are rock-solid, but its tender characterizations, particularly the deepening relationship between Ryan and his brainy, tough female partner, are what set it apart. Strong stuff."
--The Seattle Times

"The beauty of the novel comes from French's adept handling of character....The result is a wise, funny, satisfying novel that has as much to say about urban life, pop culture, and the unknown territories of friendship as it does about the mysteries hidden in the woods."
--Metro New York

"French may be a first-time author, but she has crafted a completely engrossing literary police procedural that kept me up much too late....This is quite an accomplished debut."
--"Galley Talk," Publishers Weekly

"In the Woods is a superior novel about cops, murder, memory, relationships, and modern Ireland. The characters of Ryan and Maddox, as well as a handful of others, are vividly developed in this intelligent and beautifully written first novel, and author French relentlessly builds the psychological pressure on Ryan as the investigation lurches onward under the glare of the tabloid media. An outstanding debut and a series to watch for procedural fans."
--Booklist (starred review)

"The result is a compellingly complex case with nuanced characters and a richly detailed sense of place."
--Kirkus Reviews

"[An] ambitious and extraordinary first novel...rank it high."
--The Washington Post Book World