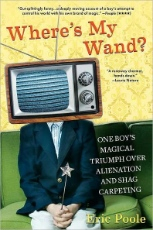 Where's My Wand?: One Boy's Magical Triumph Over Alienation and Shag Carpeting

Augusten Burroughs, David Sedaris, and David Rakoff have all produced winning memoirs of their demented, alternately heartrending and sidesplitting late- twentieth-century American childhoods. Now, first-time author Eric Poole joins their ranks with his chronicle of a childhood gone hilariously and heartbreakingly awry in the Midwest of the 1970s.

From the age of eight through early adolescence, Poole sought refuge from his obsessive-compulsive mother, sadistic teachers, and sneering schoolyard thugs in the Scotchgarded basement of his family’s suburban St. Louis tract house. There, emulating his favorite TV character, Endora from Bewitched, he wrapped himself in a makeshift caftan and cast magical spells in an effort to maintain control over the rapidly shifting ground beneath his feet. But when a series of tragic events tested Eric’s longstanding belief that magic can vanquish evil, he began to question the efficacy of his incantations, embarking on a spiritual journey that led him to discover the magic that comes only from within.

"Some good news for those who love the self-deprecating tendencies and acerbic wit of David Sedaris and Augusten Burroughs: There's a fresh, admittedly off-kilter writer whose memoir promises to leave you in stitches without a care in the world about how the person sitting next to you on the (insert any form of public transportation) perceives your mental state . . . (A) 'must-add' to your summer reading list."
-- Out

"Fragrant as it is of Love's Baby Soft perfume and hormones, Poole's memoir of growing up gay and Baptist in the seventies would be worth reading if it were just gut-splittingly funny. But Wand is also a deeply moving account of a boy's attempt to control his world with his own brand of magic."
-- People

"The real charm of the book lies in the authenticity of the humor. There is not one forced moment in the book, nor is there a stitch of disingenuous manipulation to get a cheap laugh or manufacture a setup to a joke. Each entertaining tidbit grows from the characters, their lives, their struggles, and their unforgivably shameless honesty."
-- Kirkus Reviews

"Incredible wit and honesty. Light up a Winston, open a Tab, and tuck in!"
-- Simon Doonan, author of Beautiful People

"Oh, I wish Eric Poole had been a Brady, because I would love to have been his mother. This story of a young boy in the seventies who is searching for the 'magic' in his life begins as a hilarious read, and ends as a profoundly touching tale of traumas and triumphs. I adored it!
-- Florence Henderson