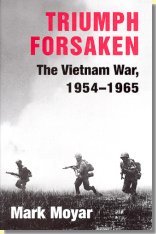 Drawing on a wealth of new evidence from all sides, Triumph Forsaken overturns most of the historical orthodoxy on the Vietnam War. Through the analysis of international perceptions and power, it shows that South Vietnam was a vital interest of the United States. The book provides many new insights into the overthrow of South Vietnamese President Ngo Dinh Diem in 1963 and demonstrates that the coup negated the South Vietnamese government's tremendous, and hitherto unappreciated, military and political gains between 1954 and 1963. After Diem's assassination, President Lyndon Johnson had at his disposal several aggressive policy options that could have enabled South Vietnam to continue the war without a massive U.S. troop infusion, but he ruled out these options because of faulty assumptions and inadequate intelligence, making such an infusion the only means of saving the country.

Reviews:
"Mark Moyar has produced the best 'revisionist' study to date of the U.S. intervention in Vietnam. Engagingly written and broadly researched, this book establishes Moyar as the leading voice of a new generation of historians intent on challenging conventional wisdom."
--William Stueck, author of Rethinking the Korean War

"Mark Moyar tells how and why the United States did not win its first war in Vietnam, 1954-1965. Triumph Forsaken replaces its predecessors because it shows how the counterinsurgency campaign might have won at acceptable cost, thus avoiding 'the big war' that followed."
--Allan R. Millet, Director, Eisenhower Center for American Studies, University of New Orleans

"I know of no scholar more dedicated to bringing a thorough and accurate portrayal of America's involvement in Vietnam than Mark Moyar. Everyone who is interested in a full picture of that oft-misunderstood war should be grateful for his effort."
--James Webb, Marine combat veteran, author of Fields of Fire and Born Fighting

"Numerous bits of conventional wisdom have accreted around the Vietnam War. It is commonly held that Ho Chi Minh was a Vietnamese nationalist above all, not a true communist, and that his victory was inevitable. That Ngo Dinh Diem was an unpopular and repressive reactionary. That the United States had no vital strategic interest in defending South Vietnam. That the 'domino theory' was a myth. That the U.S. was right not to invade North Vietnam or Laos for fear of triggering Chinese intervention. Mark Moyar, a young, bold, and iconoclastic historian, takes a sledge hammer to these hoary beliefs. Triumph Forsaken is 'revisionist' in the best sense of the word."
--Max Boot, author of The Savage Wars of Peace: Small Wars and the Rise of American Power and War Made New: Technology, Warfare, and the course of History, 1500 to Today.

"Mark Moyar provides detailed accounts of Saigon politics and of actual battles that are unmatched in any other study. He gives particular emphasis to southern Vietnamese views and experiences, and he encourages us to think about the war in fresh ways."
--K.W. Taylor, Professor of Vietnamese Cultural Studies, Cornell University

"Triumph Forsaken is a remarkable book. Moyar's work is the most powerful challenge to the orthodox interpretation of the origins of America's war in Vietnam. In taking a fresh look at the primary sources, as well as exploiting new materials from the American and communist archives, Moyar has constructed an alternative explanation for the roots of the American commitment. Moyar's book compels historians to reopen the debate about the meaning of the Vietnam War."
--Thomas Alan Schwartz, Professor of History, Vanderbilt University