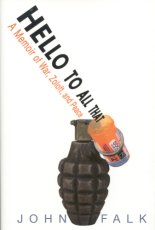 Hello to All That: A Memoir of War, Zoloft, and Peace

His own chemistry was his worst enemy, and it took John Falk from the wilds of Garden City to sniper-infested Sarajevo during one of the most savage conflicts in recent memory. But through it all, he kept reaching out for the life, love, and friendship that his illness had made impossible. Hello to All That is his story--the crazed, comic, and hopeful tale of a guy who never surrendered.

Falk was an average Long Island kid, until depression trapped him, at age twelve, in a lonely world. Ashamed and afraid, he said nothing and tried to keep going with tips from his big, loud, loyal family. By twenty-four, he was all alone, living in his parents' attic, surviving on the books by war correspondents that provided his only escape from the emptiness he felt. When he found a blue pill called Zoloft, he thought his struggle was over. But it took a journey to Sarajevo--where he set out to make his name as a reporter--to show him how far he still had to go.

John Falk's journey has never been predictable. Neither is his moving, outrageous, and sometimes suspenseful memoir. Here is the tale of a real man's fight to defeat his greatest enemy, connect, cure himself, and finally, finally live.

Reviews:
"John Falk has somehow written a book about war and the even more terrifying darkness within him that manages to be both poignant and irresistibly funny at the same time. Hello to All That is a brilliant, moving, hilarious, and altogether completely original memoir that will undoubtedly go down as an instant classic."
--Sebastian Junger, author of The Perfect Storm

"By turns hilarious and harrowing, Hello to All That is a literary tour de force that will have readers alternately laughing out loud and nervously checking their own psychological pulse. In a manner that cannot be readily explained, Falk combines the story of his own battle with depression with his madcap misadventures as a journalistic wannabe in war-ravaged Bosnia to produce a memoir that is funny, unstintingly honest, and remarkably touching."
--Scott Anderson, war journalist and author of Triage and The Man Who Tried to Save the World

"Falk's portrait of a ruined city, the confusion, and the humanity is rich and vivid, and the characters he introduces are beautifully realized. A remarkably warm, surprisingly moving, and timely portrait of daily life in a war zone."
--Kirkus Reviews (starred review)