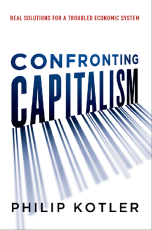 A sweeping analysis of capitalism's challenges -- and a bold new direction for the future.

With the fall of the Berlin Wall, one economic model emerged triumphant. Capitalism -- spanning a spectrum from laissez faire to authoritarian -- shapes the market economies of all the wealthiest and fastest-growing nations.

But trouble is cracking its shiny veneer. In the U.S., Europe, and Japan, economic growth has slowed down. Wealth is concentrated in the hands of a few; natural resources are exploited for short-term profit; and good jobs are hard to find.

Amidst its dire assessment of what's ailing us, Confronting Capitalism delivers a heartening message: We can turn things around. Movements toward shared prosperity and a higher purpose are reinvigorating companies large and small, while proposals abound on government policies that offer protections without stagnation. Kotler identifies the best ideas, linking private and public initiatives into a force for positive change.


"Confronting Capitalism does something I have not seen before. It takes economics and puts it on a practical human scale." -- Evil Cyclist

"Those who have even the remotest connection to the levers of power should be locked in a room and forced to digest Kotler's analysis and act upon it."
-- Darren Ingram Media