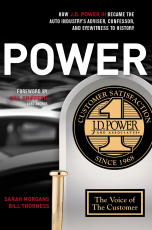 Young market researcher Dave Power founded J.D. Power and Associates in 1968, a year when revolutionary cultural and political changes abounded. Power's efforts to help the auto industry understand the value of listening directly to the voice of the customer -- the unalloyed preferences, complaints, and kudos collected from the drivers themselves -- proved to be revolutionary as well. His mission to help companies improve overall customer satisfaction would not only change how the auto industry operated; it affected the way nearly every manufacturing and service industry sought out and responded to customer feedback.

POWER: How J.D. Power III Became the Auto Industry's Adviser, Confessor, and Eyewitness to History features Power's recollections, as well as the perspectives of those who worked most closely with him, providing compelling insights into the auto industry as well as the inspiring creation of one of the world's most respected, influential, and independent consumer organizations.


"Listening to customers has always been key to making ever-better cars, being successful in America, and being rewarded with customers' smiles. Dave Power's pioneering research helped us understand what car owners wanted."
-- Akio Toyoda, president of Toyota Motor Corporation

"Dave Power's journey from tractor sales auditor to an industry leader whose name is synonymous with 'customer satisfaction' is a highly personal story as well as a fascinating account of a turbulent time in the American auto industry. If you want to understand how information became our economy's most valuable commodity, this is a great place to start."
-- Daniel H Pink, author of To Sell is Human and Drive

"POWER tells the unlikely story of how Dave Power went from unassuming market researcher to one of the most powerful and highly respected forces in the global auto-industry. I can vouch first-hand that Dave's focus on customer input, supplied in a 'just the facts' manner, played a major role in GM's -- and the entire auto industry's -- significant improvement in quality."
-- Rick Wagoner, former chairman & CEO of General Motors

"A uniquely American success story focused on satisfying the customer. Dave Power's simple but profound stroke of genius -- asking customers for their opinions -- forever transformed how we consumers are treated by the companies who seek our business."
-- Robert Spector, author of The Nordstrom Way to Customer Service Excellence