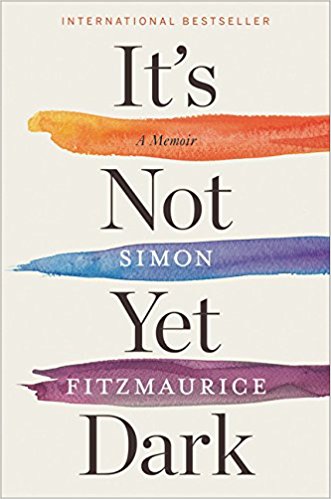 It's Not Yet Dark: A Memoir

In a memoir in the tradition of The Diving Bell and the Butterfly and My Left Foot and a #1 bestseller upon its initial release in Ireland, a young filmmaker diagnosed with ALS gives us "a story of courage, of heart, of coming back for more, of love and struggle and the power of both" (Joseph O'Connor).

In 2008, Simon Fitzmaurice was diagnosed with ALS, or Lou Gehrig’s disease. He was given four years to live. In 2010, in a state of lung-function collapse, Simon knew with crystal clarity that now was not his time to die. Against all prevailing medical opinion, he chose to ventilate in order to stay alive.

In It’s Not Yet Dark, the young filmmaker, a husband and father of five small children, draws us deeply into his inner world. Told in simply expressed and beautifully stark prose, it is an astonishing journey into a life that, though brutally compromised, is lived more fully than most, revealing at its core the potent power love has to carry us through the days.

Written using an eye-gaze computer, It's Not Yet Dark is an unforgettable book about relationships and family, about what connects and separates us as people, and, ultimately, about what it means to be alive.


“[A] gripping, affecting, sometimes funny read by a natural-born storyteller with something to say about the weight and the value of a life...If you need a story of courage, of heart, of coming back for more, of love and struggle and the power of both, It's Not Yet Dark could be the elusive thing you're after.”
— Joseph O'Connor

“A beautiful love story - in its essence that's what this is. Survival stories are not about surviving, they're inherently about what makes a survivor push through. A desire to remain in the light of all creation, even as a darkening is taking place. A darkening which happens to us all.”
— Colin Farrell

“Part memoir, part stark document of the way [Simon] and his family have dealt with motor neuron disease, and part fierce celebration of being alive, It's Not Yet Dark is powerful, gripping and compelling.”
— The Irish Times

“Sparsely and beautifully written...the human spirit and will to live shines out of these pages...By the time you reach the end of this book, with tears of admiration, sadness and frustration in your eyes, the question is no longer why would you want to live...but how could you not.”
— Irish Independent

“The word 'inspirational' is over-used, but if ever a book deserved this epithet, this is it.”
— Sunday Independent