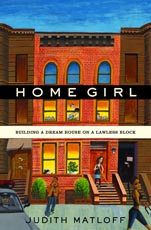 Home Girl: Building a Dream House on a Lawless Block

After twenty years as a foreign correspondent in tumultuous locales including Rwanda, Chechnya, and Sudan, Judith Matloff is ready to put down roots and start a family. She leaves Moscow and returns to her native New York City to house-hunt for the perfect spot while her Dutch husband, John, stays behind in Russia with their dog to pack up their belongings. Intoxicated by West Harlem’s cultural diversity and, more important, its affordability, Judith impulsively buys a stately fixer-upper brownstone in the neighborhood.

Little does she know what’s in store. Judith and John discover that their dream house was once a crack den and that “fixer upper” is an understatement. The building is a total wreck: The beams have been chewed to dust by termites, the staircase is separating from the wall, and the windows are smashed thanks to a recent break-in. Plus, the house—crowded with throngs of brazen drug dealers—that forms the bustling epicenter of the cocaine trade in the Northeast, and heavily armed police regularly appear outside their door in pursuit of the thugs and crackheads who loiter there.

Thus begins Judith and John’s odyssey to win over the neighbors, including Salami, the menacing addict who threatens to take over their house; Mackenzie, the literary homeless man who quotes Latin over morning coffee; Mrs. LaDuke, the salty octogenarian and neighborhood watchdog; and Miguel, the smooth lieutenant of the local drug crew, with whom the couple must negotiate safe passage. It’s a far cry from utopia, but it’s a start, and they do all they can to carve out a comfortable life. And by the time they experience the birth of a son, Judith and John have even come to appreciate the neighborhood’s rough charms.

Blending her finely honed reporter’s instincts with superb storytelling, Judith Matloff has crafted a wry, reflective, and hugely entertaining memoir about community, home, and real estate. Home Girl is for anyone who has ever longed to go home, however complicated the journey.

Reviews:
“Although I always suspected that renovating a house in New York City would be a slightly more harrowing undertaking than dodging bullets as a foreign correspondent, it took this charming story to convince me it could also be more entertaining. Except for the plumbing. That’s one adventure I couldn't survive.”
—Michelle Slatalla,  author of The Town on Beaver Creek