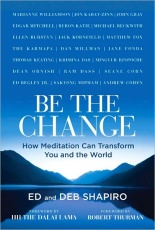 Be the Change: How Meditation Can Transform You and the World

Be the Change is a fascinating exploration of how meditation can not only awaken our latent potential but also transform the world, creating the foundation for a caring and compassionate future.


Includes wisdom from luminaries such as:

As a prisoner in a Chinese jail, Kristen Westby was able to find solace by sitting quietly in contemplation. Deeply affected by the experience of walking on the moon, astronaut Edgar Mitchell went from exploring outer space to discovering the vastness of inner space. While coping with HIV, Mark Matousek found healing through group meditation. Seane Corn used her yoga and meditation expertise to work with child prostitutes in Los Angeles.

In the last few decades, people in all walks of life have begun to realize the profound benefits of meditation. While this ancient practice is personally transformative in that it calms the mind and reduces stress, awakens the heart, and deepens insight, can meditation also change the world for the better? Two award-winning authors and some of today's most notable voices explore this issue, reflecting on how looking within can resolve issues such as anger and fear, inspiring a movement toward a more caring and peaceful future.

Interwoven among Ed and Deb's own thoughts on the subject are the words of more than one hundred meditation practitioners from various walks of life, from Ellen Burstyn, Oscar® award-winning actress, to Jon Kabat-Zinn, director of the Center for Mindfulness in Medicine, Health Care, and Society; from Marianne Williamson, bestselling author and renowned inspirational speaker, to Richard Davidson, Professor of Psychology and Psychiatry at Wisconsin University.

Enlightening and inspiring, Be the Change is essential reading for all who desire to make a difference in their own lives and in the world.

Reviews:
"Ed and Deb Shapiro have gathered together a wide range of people with a variety of experiences of meditation. I strongly recommend anyone interested in meditation not to simply read what these people have to say, but to try it out."
--His Holiness the Dalai Lama, Nobel Peace Prize Laureate

"In this living book Ed and Deb have masterfully woven the many voices into a symphony -- the insights and stories harmonize and contrast with each other in a marvelous rich flow that is both calming and energizing, creating a single collective yet selfless voice."
--Professor Robert Thurman, author of Awakening to Bliss Within

"Meditation can change the world because meditation changes us. The world will not change until we change. The state of the world is the effect; the state of consciousness of human beings is the cause."
--Marianne Williamson, author of A Return to Love and The Age of Miracles

"Who makes problems? We humans. And who is the controller of the human? The mind. And how to control the human mind? Through Meditation. If you can control the pilot, then the pilot can control the plane."
--Yongey Mingyur Rinpoche, bestselling author of Joy of Living and Joyful Wisdom