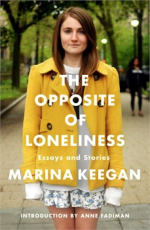 The Opposite of Loneliness: Essays and Stories

An affecting and hope-filled posthumous collection of essays and stories from the talented young Yale graduate whose title essay captured the world's attention in 2012 and turned her into an icon for her generation.

As her family, friends, and classmates, deep in grief, joined to create a memorial service for Marina, her unforgettable last essay for The Yale Daily News, "The Opposite of Loneliness,” went viral, receiving more than 1.4 million hits. She had struck a chord.

Even though she was just twenty-two when she died, Marina left behind a rich, expansive trove of prose that, like her title essay, captures the hope, uncertainty, and possibility of her generation.

The Opposite of Loneliness is an assem­blage of Marina's essays and stories that, like The Last Lecture, articulates the universal struggle that all of us face as we figure out what we aspire to be and how we can harness our talents to make an impact on the world.


"In her brief life Marina Keegan managed to achieve a precocious literary mastery. Her wry, wise, lyrical voice is unforgettable, and her vital, exuberant spirit reminds us powerfully to seize the day. Though every sentence throbs with what might have been, this remarkable collection is ultimately joyful and inspiring, because it represents the wonder that she was."
-- J.R. Moehringer, Pulitzer Prize winner and New York Times bestselling author of The Tender Bar

"I will never cease mourning the loss of my beloved former student Marina Keegan. This book gives partial evidence of the extraordinary promise that departed with her. Throughout she manifests authentic dramatic invention and narrative skill. Beyond all those, she makes a vital appeal to everyone in her generation not to waste their gifts in mere professionalism but instead to invest their youthful pride and exuberance both in self-development and in the improvement of our tormented society."
-- Harold Bloom, Sterling Professor of the Humanities and English, Yale University

"Many of my students sound forty years old. They are articulate but derivative, their own voices muffled by their desire to skip over their current age and experience, which they fear trivial, and land on some version of polished adulthood without passing Go. Marina was twenty-one and sounded twenty-one: a brainy twenty-one, a twenty-one who knew her way around the English language, a twenty-one who understood that there were few better subjects than being young and uncertain and starry-eyed and frustrated and hopeful. When she read her work aloud around our seminar table, it would make us snort with laughter, and then it would turn on a dime and break our hearts."
-- Anne Fadiman, Yale University Professor of English and Francis Writer in Residence and author of The Spirit Catches You and You Fall Down and Ex Libris

"Illuminates the optimism and neurosis felt by new grads everywhere. . .Like every millenial who's seen irony elevated to an art form, Keegan brings self-awareness to the collective insecurity of her peers even as she captures it with a precision that only comes from someone who feels it too. How unfortunate that she will never know the value readers will find in her work."
-- Publishers Weekly