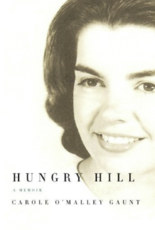 On a sweltering June night in 1959, Betty O'Malley died from lymphatic cancer, leaving behind an alcoholic husband and eight shell-shocked children -- seven sons and one daughter, ranging in age from two to fifteen years. The daughter, Carole, was thirteen at the time. In this poignant memoir, she recalls in vivid detail the chaotic course of her family life over the next four years.

The setting for the story is Hungry Hill, an Irish-Catholic working-class neighborhood in Springfield, Massachusetts. The author recounts her sad and turbulent story with remarkable clarity, humor, and insight, punctuating the narrative with occasional fictional scenes that allow the adult Carole to comment on her teenage experiences and to probe the impact of her mother's death and her father's alcoholism.

Reviews:
"This book should be placed in time capsules in Springfield, Mass., and all across the country. It's more than a memoir. It's a social document, a story of a family, a document on the human heart. Since this is an Irish-American family the ingredients are almost predictable: nuns, priests, sacraments -- and the battle with the bottle. What makes this book different is Carole Gaunt's wise prose. She writes with such compassion and understanding you'll look at your own family the same way."
--Frank McCourt, author of Angela's Ashes and Teacher Man

"Maybe the only thing stranger than the pain families inflict upon one another is the fact that one survives it. Carole Gaunt has made a beautiful story of all that, without a false note, a word wasted, or a flinch. One is grateful for this memoir and for the author who, as a child, kept her eyes open."
--Roger Rosenblatt, author of Lapham Rising: A Novel

"Hungry Hill is engaging and memorable . . . One of the most endearing aspects of the book is its lack of guile and its feeling of authenticity -- it glows with honesty."
--Madeline Blais, author of Uphill Walkers: Portrait of a Family

"A vivid portrait of the transgenerational effects of alcoholism and a courageous response to the disease . . . The book captures the essence of the isolation, fear, and sadness of a girl who, instead of having a childhood, lived a dilemma -- doing all the right things, being a good girl who realizes that everything she does she does alone or under an umbrella of shame and wishful thinking, living in a home overshadowed by the effects of alcoholism from one generation to the next."
--Maureen McGlame, director, COASA (Children of Alcoholism and Substance Abuse), Robert F. Kennedy Children's Action Corps

"To paraphrase Tolstoy, 'Happy families are all alike, but every alcoholic family is unhappy in its own way.' In this powerful memoir, Carole Gaunt writes of being the only girl in a family with seven brothers and an alcoholic father, following the early death of her mother. For those of us who also grew up around alcoholism, her story and insights are poignant and involving . . . Reading about the author seeking out jobs so she would never have to ask her stepmother for money gave me a feeling of measured triumph in how the small choices an individual makes can lead the way out of family traps; looking for those jobs and deciding to look to herself for stability rather than to the crazy adults around her was the beginning of health. But the book also shows how dysfunctional families rob their children of trust and innocence way too soon, and how that haunts them in their later years. A moving story."
--Christopher Durang, author of Christoper Durang: 27 Short Plays