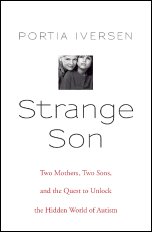 Strange Son: Two Mothers, Two Sons, and the Quest to Unlock the Hidden World of Autism

Portia Iversen was an award-winning art director and television writer whose life changed irrevocably when her son Dov was diagnosed with autism at the age of two. As she and her husband, Jon Shestack, sought treatments for Dov and struggled to understand what was happening, they were stunned to learn that almost nothing was known about the disorder and only a handful of researchers were even studying it.

Faced with little hope of a medical breakthrough in Dov's lifetime, Iversen and her husband started the foundation Cure Autism Now, knowing that speeding up the pace of autism research might be the only meaningful thing they could do to help their son.

One day Iversen heard about a severely autistic nonverbal boy in India whose mother had taught him to read, write, and communicate. Soma Mukhopadhyay's methods were unorthodox, and her tools surprisingly simple -- just a piece of cardboard with the alphabet written on it -- but her achievement was astonishing: not only could Tito communicate, but he had an IQ of 185 and wrote beautiful poetry. Iversen realized that Tito could provide an unrivaled window into autism, and she organized a visit to the United States for the boy and his mother and arranged for some of the country's top scientists to study him.

Strange Son is the captivating account of these two families and how their personal journeys into autism intersected for a time and allowed Tito to explain to scientists the startling differences in his sensory perception, giving them insights that reframed the very definition of autism, and challenging everything we thought we knew about it.

Reviews:
"Strange Son tells the story of Portia Iversen's journey through the halls of science and the new frontiers of the brain, and finally to a meeting with an extraordinary woman from India who was equally determined to show the world that her own autistic son was intelligent and so much more than his symptoms. Strange Son challenges many of our beliefs about autism and is lasting proof that there can be so much more on the inside than what is revealed by the outside."
--Bradley Whitford, actor

"I know one little boy with autism pretty well. He can't tell me what he's thinking, but when I look into his sparkly brown eyes, I know that he is in there and that he's counting on us to help him get out. Portia Iversen's Strange Son is a wake-up call to the world that there are many more of these children than anyone ever knew, and that we must try a lot harder to find a way to connect with them."
--Anthony Edwards, actor

"Love introduced two mothers, one who lived in India and the other in the United States. Their passion to seek health for their children, both afflicted by autism, brought the two women across continents and over oceans. Each stimulated the other with her fervor to find medical breakthroughs. Their story is exciting and uplifting. There is within Strange Son a sadness, but this in truth is a hopeful book. The mothers expect that medical research will find a solution for the cruelty of autism, and in Strange Son they show us that the lushness of family love continues to be the greatest therapy."
--Maya Angelou

"Portia Iversen has used her eyes and ears to pierce the seemingly impenetrable armor of the autism puzzle, and Strange Son reflects the genius of her ability to observe and to listen, filing away in remarkable detail the life experiences of two boys who carry with them the essential clues for understanding the underlying disturbances in brain architecture and function that result in autism."
--Pat Levitt, PH.D., Director, Vanderbilt Kennedy Center for Research on Human Development

"Portia Iversen's personal experience led her from life as the parent of an autistic son to a leader in changing our outlook on this disorder and exploring its underlying cause. This is the story
of her journey."
--John Mazziotta, M.D., PH.D., Chair, Department of Neurology, David Geffen School of Medicine, UCLA

"Faced with the challenging contradiction of great poetic gifts in a severely nonverbal autistic boy, Portia Iversen embarked on a passionate odyssey through science and scientists to unlock this 'Rosetta stone of autism' and to understand her own son, which led her to reframe autism as a profound mistiming of the senses. This is an important, beautifully written book that makes gripping reading."
--Martha Herbert, M.D., PH.D., neurologist, Massachusetts General Hospital and Harvard Medical School

"Strange Son is a stunning book -- at once passionate, provocative, and profound. The power of this unique and compassionate story will restore hope to families and galvanize our scientific quest."
--Peter C. Whybrow, M.D., Director, Semel Institute for Neuroscience and Human Behavior, and author of American Mania: When More Is Not Enough