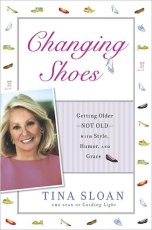 Changing Shoes: Getting Older - Not Old - with Style, Humor, and Grace

You might be wondering what a soap opera actress, dispatched from the land of outrageous and hilarious plots, has to say about a difficult, painful, and emotional real-life issue like aging. Well, aging is at times both outrageous and hilarious, and no one knows more about reinvention and perseverance than an actress who began her career as the star of a show -- and then became the mother of the star, and then the grandmother of the star. Getting older keeps you on your toes -- you have to fight to remain visible, or risk being pushed to exit stage left.

In Changing Shoes, Tina Sloan addresses the issues and feelings most women eventually have to deal with, using humorous personal anecdotes from her personal life (starting with her first pair of Chanel pumps) and her twenty-six years on Guiding Light (where she started out in a pair of white high heels and a fitted nurse's uniform and finished off in sneakers and modern nurse's scrubs). Changes in her looks, love life, career, and family are managed with footwear to match: broken-in black flats when taking care of her aging parents, lavender "Cinderella" shoes to seduce her husband, and pink snow boots to hike Mount Kilimanjaro.

Tina's commitment to live life to the fullest is inspiring and filled with advice on everything from retaining the spark and zest of younger days, staying "forever frisky," expanding your world, and, as Tina puts it, "staying in the game."  Women of all ages will identify with Tina's personal stories and appreciate her sincerity, honesty, inspiring words, and endearing sense of humor.

Reviews:
"When Tina and I first started in soaps we were both the young temptresses. In her fabulous and entertaining book, Changing Shoes, she shows us that even though our roles as actress, wife, daughter, and mother may change as time goes on, with the right attitude -- and shoes -- we can stay sexy and relevant and take on new challenges, whether we're dancing with the stars or climbing Mount Kilimanjaro."
--Susan Lucci, Emmy-winning star of All My Children

"Tina Sloan LOVES shoes -- what woman doesn't!  But her feeling that the right pair makes you feel really special becomes a clever metaphor for stepping into life's ups and downs with a healthy attitude.  Changing Shoes is a breezy, thoughtful perspective on how to enjoy life fully."
-- Arie L. Kopelman, vice chairman of Chanel, Inc.

"For twenty years I watched the glamorous Tina Sloan play Nurse Lillian Raines on Guiding Light.  Little did I know that as she retired into middle age, she'd write a book with an irresistible title.  (How could Tina know shoes are my weak point and greatest indulgence?)  Changing Shoes, which discusses the challenges of getting older with dignity, style, and humor, is now my latest indulgent weakness.  I love the casual philosophies herein.  A terrific book for any woman who thinks she can't go on without Botox."
-- Liz Smith

"Exhilarating! Tina's life is relatable to women of all ages as shes struggles and overcomes life's challenges by simply refusing to give up and by wearing the right pair of shoes."
-- Annette de la Renta