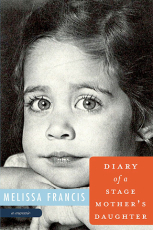 Diary of a Stage Mother's Daughter

A dazzling honest and provocative family memoir by former child actress and current Fox Business Network anchor Melissa Francis -- both a startling personal story and a cautionary tale for both parents in competitive times.

When Melissa Francis was eight years old, she won the role of lifetime: playing Cassandra Cooper Ingalls, the little girl who was adopted with her brother (played by young Jason Bateman) by the Ingalls family on the world's most famous prime-time soap opera, Little House on the Prairie. Despite her age, she was already a veteran actress, living a charmed life, moving from one Hollywood set to the next. But behind the scenes, her success was fueled by the pride, pressure, and sometimes grinding cruelty of her stage mother.

While Melissa thrived under pressure, her older sister -- who had tried her hand at acting and shrank from the limelight -- was often ignored by their mother in a shadow of neglect and disappointment. Tiffany could do nothing to please her mother, but it wasn't until after Melissa had graduated from Harvard University with a degree in economics, found love, and married that Tiffany's personal problems culminated in a life-and-death crisis. When Melissa realized the role of her mother continued to play in her sister's downward spiral, she resolved to end the manic, abusive cycle once and for all.

Diary of a Stage Mother's Daughter is a fascinating account of life as a child star in the 1980's, and also a disquieting tale of a family under the care of a highly neurotic, dangerously competitive "tiger mother." But perhaps most importantly, now that Melissa has two sons of her own, it's a meditation on motherhood. She asks the questions so many of us ask ourselves: how hard should you push a child to succeed, and at what point does your help turn into harm?


"Melissa Francis shares important lessons hard-won at her meddling mother's side and offers an important cautionary tale for any family with big dreams for its children."
-- Laurel Saville, author of Unraveling Anne: A Memoir of a Mother's Reckless Life and Tragic Death

"I am always in search of the book I can't put down. Well, thanks to Melissa Francis, I FOUND it. I may have missed a few nights sleep, but I am so much better for it. Her book is captivating, revealing and ultimately healing. Who knew the kid from Little House on the Prairie had such a fascinating real-life story? I am in awe."
-- Hoda Kotb, author of Hoda: How I Survived War Zones, Bad Hair, Cancer, and Kathie Lee, and co-host of the Today show

"Melissa Francis' story is riveting. The book is the perfect antidote for the 'Tiger Mom' syndrome that seems to be gaining traction in today's society . . . If you want to be inspired to reach beyond what you were taught as a child, get this book now."
-- Melissa Gilbert, author of the bestselling Prairie Tale: A Memoir

"Really powerful reading . . . Melissa has eloquently told the difficult and disturbing story of how a mother's absolute, unrelenting narcissism led her to sacrifice the well-being of both of her children. Melissa has triumphed heroically over her circumstances."
-- Alison Arngrim, author of Confessions of a Prairie Bitch

"Chilling memoir by a Fox Business Network anchor and child star chronicles the misery of growing up with a cruel, controlling and abusive stage mother. Francis' narrative grabs readers immediately. One of those intimate, heartbreaking, doubled-edged stories that is hard to read, impossible to put down."
-- Kirkus Review

"Compelling . . . A thoughtful trek across a troubled family landscape resulting in a bittersweet yet hopeful final act."
-- Publisher's Weekly