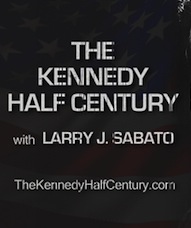 The four-week, massive open online course (MOOC), "The Kennedy Half Century," will begin on Oct. 21, with two hours of video instruction each week by Prof. Sabato. The course is available through Coursera, an educational website that partners with some of the world's top universities, including the University of Virginia, to provide free online courses. Anyone can register for the course at www.coursera.org/course/kennedy.

The MOOC is one of several initiatives the U.Va. Center for Politics is unveiling this fall in conjunction with the 50th anniversary of JFK's assassination. Prof. Sabato's latest book, The Kennedy Half Century: The Presidency, Assassination and Lasting Legacy of John F. Kennedy, will be released in October as the class begins. Also in October, the Center will premiere a one-hour national PBS documentary on the same subject, which is being produced in partnership with Community Idea Stations. The Center for Politics and Community Idea Stations recently received an Emmy Award for their previous documentary, "Out of Order," which is about political dysfunction in Washington.

A trailer for the "The Kennedy Half Century" class is available here.

"The University of Virginia Center for Politics has long been committed to providing accessible educational tools about American politics and government. This free online course about how JFK and his legacy have influenced the public, the media, and each of the nine U.S. presidents who followed President Kennedy is one way we can deliver high-quality instruction, at no charge, to a large audience," Prof. Sabato said.

The course begins with the early legislative career of John F. Kennedy and progresses through the 50 years since Kennedy's death, focusing on how each president, Lyndon Johnson through Barack Obama, has used JFK to craft their own political image. The class offers more than eight hours of video consisting of 40 lessons averaging 10-20 minutes each in length. Each week, there will be at least two new hours of content, including historical footage from each of the 10 presidential administrations of the last half-century. Prof. Sabato will focus four lessons around Kennedy's assassination as the nation marks the 50th anniversary of 11/22/63.

New portions of the class will be posted to the Coursera page each week. Students who complete the course do not receive university credit, but they will receive a statement of accomplishment. More information about the course's specifics, including a syllabus, is available at www.coursera.org/course/kennedy.

Online learning is not new to the U.Va. Center for Politics, which has provided online education tools through its Youth Leadership Initiative (YLI) since 1998. YLI conducts regular mock elections for students, as well as an interactive legislative simulation called E-Congress.

"For the last 15 years YLI has developed and distributed free civics education lesson plans using the Internet," noted Prof. Sabato. "Today YLI reaches more than 50,000 teachers and millions of students throughout the country and around the world."

Founded by political analyst and Professor Larry J. Sabato, the U.Va. Center for Politics (www.centerforpolitics.org) is a nonpartisan institute that seeks to promote the value of politics, improve civics education, and increase civic participation through comprehensive research, pragmatic analysis, and innovative educational programs.