Back when Richie Goldman started working on the sales floor of a small clothing store, it had annual sales of only a few hundred thousand dollars. Over the years he helped grow that one store into the emerging and now omnipresent Men's Wearhouse. By the time Goldman retired early in 2002, there were 680 Men's Wearhouse-affiliated stores across the United States and Canada, the business was known nationally and internationally, and had annual sales in excess of $1.27 billion.

Widely recognized as the marketing mastermind behind the success of Men's Wearhouse, Goldman has also been a quiet force in business, education, and volunteerism. His luck -- luck that he has actively created -- has expanded his life in ways and directions well beyond anything he might have imagined as a child in Hazleton, Pennsylvania, or later, as he began contemplating the larger world and his future in it. 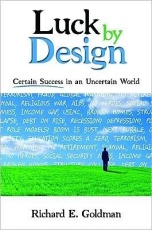 Luck by Design: Certain Success in an Uncertain World