Martina Navratilova, with her record 9 Wimbledon singles titles and 58 Grand Slam titles, is the best female tennis player of the modern era, and possibly the greatest in the history of the sport. In January 2003, she won the Australian Open mixed doubles title with Leander Paes, making her, at age 46, the oldest winner, male or female, of a Grand Slam title. She also won the mixed doubles title at Wimbledon in 2003, tying a record 20 Wimbledon titles held by Billie Jean King. Martina is still competing in doubles on the WTA Tour and at the Grand Slams. Visit her at www.martinanavratilova.com. 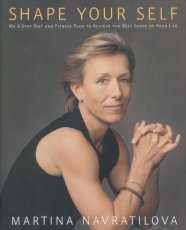 Shape Your Self: My 6-Step Diet and Fitness Plan to Achieve the Best Shape of Your Life