Ariane de Bonvoisin is the founder of first30days.com, a website that helps people transition through dozens of changes, whether the change involves a health diagnosis, going green, moving to a new city, or getting married. She has a degree in economics and international relations from the London School of Economics and an MBA from Stanford University. Ariane worked at the Boston Consulting Group and with media giants BMG, Sony, and Time Warner before pursuing her dream to make a difference in people's lives. First30days.com became her life's work in 2005. Ariane is based in New York City where her company is also headquartered. Visit the author online at www.first30days.com. 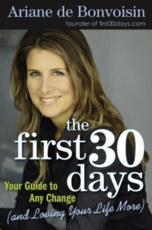 The First 30 Days: Your Guide to Any Change (And Loving Your Life More)